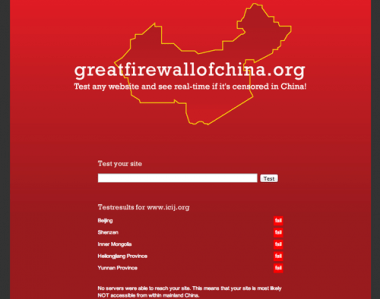 (Download a PDF of the investigation in Mandarin here)

Internet censors prevented readers in China from seeing investigative stories by the International Consortium of Investigative Journalists and several of its publishing partners, including Spain’s El País,Le Monde, Süddeutsche Zeitung in Germany, the Canadian Broadcasting Corp., and the U.K. and U.S. editions of The Guardian, according to reports from news organizations and analytics by GreatFire.org, which monitors web censorship in China.

China routinely censors online domestic content and blocks foreign social networking websites such as Twitter and Facebook, but the broad news blackout targeting so many international media outlets was unusual in its scope. Individual sites have been targeted in the past, including The New York Times and Bloomberg, which separately saw their sites blocked after releasing reports on elite wealth in China.

In Beijing, a spokesman for the Ministry of Foreign Affairs Qin Gang dismissed the story calling it “hardly convincing” and said it raises “suspicions over the motives behind it.”

ICIJ’s story was released in China early Wednesday and coincided with the trial of prominent Chinese legal advocate Xu Zhiyong, a campaigner for greater financial transparency. Xu could face up to five years in jail for activities linked to his campaign to get officials to publicly disclose their financial assets. In a symbolic protest against the proceedings, Xu and his attorneys refused to speak during the trial, the Washington Post reported.

Read the rest at ICIJ.org.