Ron Davis holds a picture of his 17-year-old son Jordan Davis, who was shot and killed at this Jacksonville gas station Nov. 23, 2012. Walter Coker/Florida Center for Investigative Reporting

This story was reported by Eric Barton for the Florida Center for Investigative Reporting. 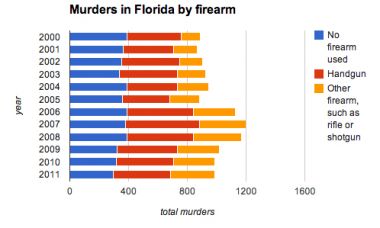 Michael David Dunn didn’t like the volume of music coming from the SUV parked next to him at a Jacksonville gas station. So he yelled over the bass vibrating from a boxed speaker in the back of a red Dodge Durango and told the men inside to quiet down.

“Kill him,” one of the Durango’s passengers responded, according to Dunn’s account. Dunn, who is white, said one of the young black men in the SUV reached down for a shotgun. Dunn pulled out a 9-millimeter Taurus handgun from his glove box. He fired eight or nine times.

The bullets sliced through the rear passenger door, striking 17-year-old Jordan Davis in the chest and legs. A high school senior with plans to go into the military, Davis died before arriving at the hospital.

While it’s unclear whether Dunn was the aggressor or defending himself with his handgun, shootings like this one on Nov. 23, 2012, now are common in Florida.

Murders by firearms have increased dramatically in the state since 2000, when there were 499 gun murders, according to data from Florida Department of Law Enforcement. Gun murders have since climbed 38 percent — with 691 murders committed with guns in 2011.

Only partial numbers are available for 2012, but from January to June, there were 479 murders in Florida — 358 of them committed with a gun. That’s an 8 percent increase in gun murders compared to the same period in 2011.

Guns are now the weapons of choice in 75 percent of all homicides in Florida. That’s up from 56 percent in 2000.

The rise in gun homicides in Florida comes at a time when the overall murder rate has declined in Florida, and violent crime has dropped statewide.

It also comes at a time when gun control is at the forefront of national debate. Proposals before Congress died last week in a tight Senate vote, but surveys show a majority of Americans favor tougher firearms regulations. Supporters say stricter background checks that were rejected by Congress could lessen the number of gun murders.

In Florida, shootings have received a greater attention ever since George Zimmerman cited the state’s “stand your ground” law in the February 2012 shooting of 17-year-old Trayvon Martin. Those on both sides of the gun control debate say the killing emboldened gun owners to carry firearms, and that the increase in guns may have led to the rise in gun murders.

There’s no clear answer as to why gun murders have increased so dramatically. But one fact is hard to ignore: Floridians own more guns than they did a decade ago, when the gun murder rate was significantly lower.

The number of background checks accounts for only a portion of all gun owners. Many more bought firearms from private sellers and at gun shows, and there is no federal background check or reporting requirement on those sales. Florida, which lagged behind the national average in gun ownership a decade ago, is now in line with that national average, which a recent Gallup Poll put it at 47 percent.

“Since President Obama took office, people expected him to get tougher on guns,” Kleck says. “Even though that hasn’t happened yet, a run on gun sales occurred.”

A police shooting in Orlando highlighted Florida’s gun show market. Angry over a car accident, David Alyn Penney is accused of unloading 30-round clips from two assault weapons at a home on Alabama Avenue in St. Cloud on Nov. 21, 2011. When cops arrived, Penney allegedly turned the guns on the officers, shooting one in the foot and injuring a rookie cop with shattered glass.

Nobody died in the exchange, but investigators later learned that Penney bought the assault rifles at a gun show shortly after his 18th birthday. Prosecutors have cut a deal with Penney in which he will plead no contest in exchange for serving eight years in prison; a judge has yet to sign off on the agreement. Prosecutors indicated in court that Penney’s mental health is the reason for the short sentence — a mental health history that might have been discovered if a background check had been required before he bought the assault weapons.

Gun advocates, however, challenge the anecdotal evidence that comes from cases like Penney’s and believe that an increase in guns doesn’t necessarily lead to an increase in gun-related crimes. Dave Wood, president of the West Palm Beach-based Second Amendment Coalition, said sales at gun shows and shops have “gone gangbusters” in recent years. But according to Wood, those guns don’t land in the hands of murderers.

“It’s unlikely that law-abiding citizens have contributed to this increase” in gun murders, Wood said. “The people who are buying guns after Obama are not the ones committing the murders.”

Ladd Everitt, communications director for the Washington, D.C.-based Coalition to Stop Gun Violence, disagrees. He said it’s no coincidence that gun murders rose at a time when gun ownership increased in Florida. In addition, Everitt said high-profile “stand your ground” cases have given gun owners greater confidence to settle disputes with firearms.

“The point of the shoot-first law was to embolden people to carry guns out in public,” Everitt said. “This creates more chances for shootings, and Floridians probably feel much more emboldened to take those shots because they know there’s a law that might protect them.”

But according to John R. Lott, the author of several books on gun ownership, including The Bias Against Guns, it’s deceptive to focus on the increase in gun murders in Florida when the murder rate overall has gone down. Since 2000, the murder rate — or the number of homicides per 100,000 people — has decreased from 5.6 to 5.2. That’s the second-lowest murder rate recorded since the state began keeping statistics in 1971.

“The main thing that concerns people is the murder rate overall,” Lott said from his home in Virginia. “People want to see it go down, and if it has, whether guns were involved is unimportant.” 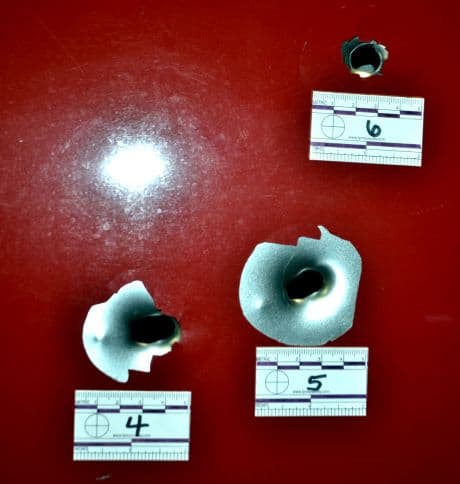 Michael David Dunn fired as many as nine times into a parked Dodge Durango.

‘A Shield for Gun Owners’

After Dunn shot and killed the 17-year-old at a Jacksonville gas station, police did not find the shotgun that the shooter alleged was pointed at him. No one else at the scene of the shooting reported seeing a gun in the Durango. Prosecutors initially charged Dunn with second-degree murder, but a grand jury in December upgraded the charge to first-degree murder, an unusual move. Dunn has remained in jail since without bail.

Dunn’s attorney didn’t respond to requests for comment. But John M. Phillips, a lawyer representing the family of the slain teenager, said the case highlights the dangers of “stand your ground” laws and concealed carry permits.

“With this law, it’s really not defending yourself anymore as much as it is exerting your power,” Phillips said. “A situation that used to be handled by reason is now handled by gunfire.”

The teen’s father, Ron Davis, is now an opponent of the “stand your ground” law and gun ownership. He has held prayer vigils and is planning a trip to Washington, D.C., to lobby for tougher gun laws.

“Not only are there more guns out there, but there are these laws that are like a shield for gun owners,” Davis said. “More people take ‘shoot first’ as a way to solve arguments, and these ‘stand your ground’ laws allow them to do that.”

After the shooting, Dunn and his fiancé drove to a hotel where they were staying for the night. He said he didn’t know anybody had been hurt until he saw a press conference on TV. Dunn was arrested the next day, 170 miles away at his home in Satellite Beach.

His trial hasn’t been scheduled, but if jurors believe he was threatened, Dunn could be acquitted under Florida’s “stand your ground” law. If they believe he was the aggressor, Dunn will have added one more homicide to Florida’s growing number of gun murders.

The Florida Center for Investigative Reporting is a nonprofit news organization supported by foundations and individual contributions. For more information, visit fcir.org.

Tampa and Miami in cold war over Cuban trade