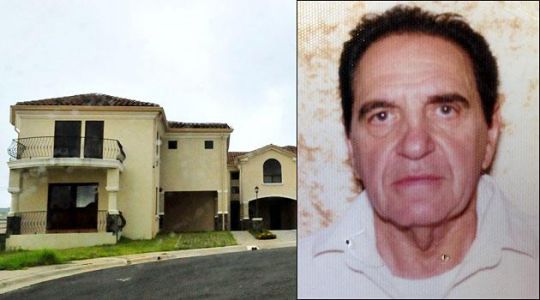 Carmen “Buddy” Cicalese, and some of his houses in Barreal de Heredia, Costa Rica.

An American wanted on organized crime charges in New Jersey and New York shuffled more than $1 million around the world through accounts at JPMorgan Chase & Co. and Australia’s ANZ Bank, confidential records show.

State and federal authorities in the U.S. claim that Carmen “Buddy” Cicalese ran a “wire room” in Costa Rica that processed millions of dollars in sports bets for American bookies with the help of a colorful cast of operatives boasting street names such as “Cleaver” and “Lou the Shoe.”

A former New York police officer and a reputed Genovese crime family associate have been charged along with Cicalese, who moved from New Jersey to Costa Rica in 2003 and now is a naturalized Costa Rican citizen.

Records show that Cicalese set up an offshore company based in the Cook Islands in the South Pacific as New Jersey police were investigating the suspected gambling ring in early 2004.

The offshore company in turn opened a bank account with one of Australia’s largest banks, ANZ, funneling at least $1.1 million into the account, bank statements show. Other records indicate Cicalese used hundreds of thousands of dollars that filtered through other banks – including U.S.-headquartered JPMorgan Chase – to purchase real estate in Costa Rica.

Carmen Cicalese did not reply to a request for comment left at his office in Costa Rica.

How well big banks screen their customers to ensure they’re not involved in money laundering or other crimes has become anincreasingly hot issue. Financial crime experts say racketeers and rogues who move money through offshore hideaways rely on access to mainstream banks to shift their assets.

In December, for example, HSBC agreed to set aside more than $1.9 billion to settle an investigation by U.S. officials into evidence that the bank had served as a conduit for dirty money controlled by terrorists and drug traffickers. In January, U.S. regulators cited JPMorgan for “critical deficiencies” in its anti-money-laundering safeguards.

JPMorgan did not answers questions about transactions linked to Cicalese. A spokesman for the bank has previously said that complying with anti-money-laundering rules “is a top priority for us.”

A spokesperson for ANZ said the bank couldn’t comment on individual customers, but said it takes its anti-money laundering responsibility “very seriously” and has “a comprehensive framework to ensure we are meeting our obligations.”

ANZ said it continually monitors customers’ activities, reports suspicious activity to regulators and closes accounts “deemed to be an unacceptable risk.” The bank added that it has “been systematically exiting relationships with international companies and trusts identified as ‘high risk.’ ”

Inside the global offshore money maze

Cicalese was among dozens of individuals targeted nearly a decade ago by New Jersey police and prosecutors as part of an organized crime sting dubbed Operation Jersey Boyz.

The company, RAC Corporation, was established with the help of Portcullis TrustNet, an offshore services provider headquartered in Singapore. After establishing an account through an ANZ branch on the Cook Islands, RAC received several money transfers from Costa Rica and the United States, according to the documents.

New Jersey officials went public with Operation Jersey Boyz in late 2004, lodging a variety of criminal charges against Carmen Cicalese and more than 40 other suspects.

The Bergen County, N.J., prosecutor’s office charged Carmen Cicalese, 73 at the time, with racketeering, money laundering and conspiracy to promote gambling. Others involved in the alleged crime ring were charged with loan sharking, bribery, extortion and truck-jacking, the prosecutor’s office said. One defendant was accused of setting fire to the vehicle of a bettor who refused to pay up on a $5,000 bet.

Because he was living in Costa Rica at the time, Carmen Cicalese was not taken into custody.

His son, Anthony, was not charged in the case.

The son expressed concern, though, about the possibility of being arrested in the United States — and about keeping the origin of the funds transferred into the ANZ account quiet, documents reviewed by ICIJ and La Nacion indicate.

A file note written by an official with TrustNet, the offshore services firm, describes a telephone conference held in February 2005 with Anthony Cicalese: “AC has concerns that if he visits the US he may be arrested or subpoenaed in respect of the gaming business he does in Costa Rica.”

The TrustNet official wrote that Anthony Cicalese confirmed that the offshore company would hold proceeds from gambling and that the U.S. considered the betting operation to be illegal. The official assured him that, under Cook Islands law, TrustNet would provide no information if U.S. authorities made inquiries. Any requests for information by American law enforcement officials would have to be routed through the Cook Islands government, she said.

ICIJ sent several questions to Anthony Cicalese about his involvement in RAC Corporation but received no reply.

In April 2005, the ANZ account controlled by the Cicaleses’ offshore company received a transfer of $740,000, records show. The money represented the proceeds from the sale of a house that Carmen Cicalese owned in New Jersey, according to an email from the TrustNet official to an ANZ representative.

Money soon started going out. The records show that in May 2005, for example, Anthony Cicalese asked ANZ Bank to transfer $300,000 to a bank account linked to a company in Panama. “We are purchasing a building in Partnership with this group,” he explained in his request.

More money came in to replenish the ANZ account, bringing the balance above $1.1 million in July 2007, records show.

In early 2008, a new front opened in the criminal investigations involving Carmen Cicalese. Federal prosecutors in New York unsealed an indictment charging him and 11 others with illegal gambling and money laundering.

The indictment claims “the Cicalese Wireroom” operated through a toll-free telephone number and various websites, including datawager.com and betwestsports.com. The operation set up accounts that allowed hundreds of bookies in the U.S. to take bets on hockey, basketball, football and baseball. State prosecutors in Queens, New York, later said that bets ranged from $200 to $4,000 per game.

Records obtained by La Nación show that Carmen Cicalese made several large real estate purchases in Costa Rica in the wake of the new round of criminal charges. The purchases, made between 2008 and 2009, included eight houses for which he paid $1.2 million.

For those properties, he made 43 payments, most of them with checks drawn on Banco Nacional de Costa Rica. However, he paid as much as $300,000 in September 2008 with a check from a JPMorgan account, according the records reviewed by La Nación.

In early 2009, Carmen Cicalese caught a break when the New Jersey criminal charges against him were dismissed. Charges were dropped against many defendants in the Jersey Boyz saga after a judge ruled that much of the wiretap evidence in the case was not admissible in court.

Cicalese is charged in Queens with 78 counts of promoting gambling, five counts of money laundering, two counts of conspiracy and one count of “enterprise corruption,” Kevin Ryan, a spokesman for the Queens district attorney, told ICIJ.

Cicalese is considered a fugitive on the state and federal charges in New York, according to Ryan and Jerika Richardson, a spokeswoman for the U.S. Attorney’s office for the southern district of New York.

In 2012, Cicalese adopted Costa Rican citizenship by naturalization, according to the Web page of the Civil Registry of Costa Rica.

U.S. authorities have apparently not attempted to extradite Cicalese from Costa Rica. U.S. officials have not forwarded an arrest warrant for Cicalese to Costa Rican authorities, according to a spokesperson for Costa Rica’s attorney general.

Ronny Rojas is an investigative reporter with La Nación, a daily newspaper in Costa Rica.