Buried in Congress’ spending agreement: a small but notable step to reform a controversial program. 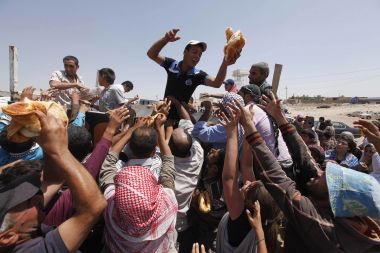 Syrian refugees gather for food aid after crossing into Iraq in August 2013.

A federal spending bill working its way through Congress would take a step toward reforming America’s controversial food aid program, by allowing more aid to be purchased within the regions that receive it.

Last fall, a Center story detailed how special interests were fighting to preserve the U.S.’s unusual food aid system. Unlike other developed countries, which purchase most food aid near where it is delivered, the U.S. buys food from American farms, ships it on American vessels, and gives away much of the goods free of cost for humanitarian groups to distribute. Although the Government Accountability Office, a watchdog arm of Congress, has concluded that this system is “inherently inefficient” and can be harmful to farmers in recipient nations, for decades the setup has been politically untouchable.

The Center’s piece revealed how a small but determined group of shipping unions sunk efforts to reform this system last year by persuading progressive, labor-friendly Democrats to oppose any changes.

Now, a sweeping agreement on 2014 federal spending includes a small but notable step toward reshaping this system. The deal was approved yesterday by the House of Representatives and is expected to be easily approved by the Senate as well.

The spending agreement includes a provision that would allow $35 million from Food for Peace, America’s largest food aid program, to be spent procuring aid locally. The entire Food for Peace program currently must be spent on food grown and shipped from America, much of which is “monetized” by being given away free of cost for humanitarian groups to sell.

The Obama administration estimated that broadly reforming this system would allow it to reach up to 4 million more people with food aid each year for the same price. The United States Agency for International Development (USAID), the agency that distributes food aid, said the strict limitations in the current system forced it to choose among needy regions that could only be served by cash aid, at one point scaling back aid to Somalia due to humanitarian crisis in Syria.

The amount being shifted in the deal struck by Congress is only $35 million — a drop in the bucket of the nearly $1.5 billion Food for Peace program. But it came with a striking explanation from the Senate committee that drafted the provision.

“This represents a significant initial step in phasing out the practice of monetization over the next several years to ensure government resources are efficiently utilized,” wrote the Senate Agricultural Appropriations committee in its report on the bill.

While the report reflects the views of the Senate committee that wrote it rather than Congress as a whole, it suggests a growing appetite in Congress for reshaping the food aid system.

Blake Selzer, a senior policy advocate for the aid group CARE who has promoted food aid reform, said the changes would have a concrete impact.

“It will result in a more efficient and effective food aid program able to reach more of the world’s most vulnerable populations,” Selzer said in an email. “This flexibility will enable the U.S. to respond quickly to crisis in places like the conflict in Syria, or the natural disaster in the Philippines.”

ICIJ guide to voter restrictions around the world