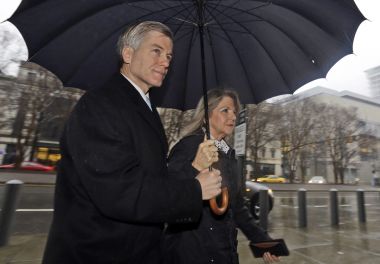 Virginia lawmakers have moved to strengthen the state’s modest ethics laws, approving reform legislation that seeks to reign in excessive gifts to public officials. Even before the bill passed, however, critics had already begun deriding the effort as little more than a gesture, and it remains unclear whether new Gov. Terry McAuliffe will sign the measure in its existing form.

Virginia has among the least restrictive ethics laws in the nation, and the issue has become front-page news in the Old Dominion. The state received a grade of F from the State Integrity Investigation, a 2012 survey of ethics and transparency laws carried out by the Center for Public Integrity, Global Integrity and Public Radio International. And the legislature had come under intense public pressure to strengthen those laws after news broke last year that former Gov. Robert F. McDonnell and his family had received at least $165,000 in gifts — most of which were not disclosed — from a political supporter.

The bill, which was passed on Saturday, puts an annual limit of $250 on gifts from lobbyists and people seeking business with the state to lawmakers and other public officials. But that cap does not apply to gifts of travel, meals, entertainment or other events, which make up the majority of the largess that lobbyists bestow on lawmakers.

State Sen. John S. Edwards, chairman of the Senate Rules Committee, which was in charge of the legislation, acknowledged the reforms do not go as far as he would have liked — but asserted that the effort represented at least a first step. “We needed to do something,” he said. “This was something.”

Many others have not been so generous. “The bill is so slack it would be disingenuous to refer to it as ‘reform,’” the Washington Post wrote in a February editorial before the bill’s final passage. “In fact, it would do practically nothing to stanch the cascade of freebies to which Richmond’s high and mighty evidently feel entitled.”

Other newspaper editorials have called the effort “shoddy” and “falling short,” and the reforms may end up having little effect on the number or size of gifts given to politicians, said Anna Scholl, executive director of ProgressVA, a liberal watchdog group. “The final version is a pretty useless law,” Scholl said. “It’s just not going to do very much.”

An analysis by ProgressVA showed that the law would not have prevented any of the 756 gifts received by lawmakers in 2012, for example. Only 18 of those were so-called “tangible” gifts — that is, not travel or other events which largely escape coverage under the new bill — the analysis found. And while eight of the tangible gifts were worth more than $250, none of them came from registered lobbyists and so would likely have been allowed under the new law.

It’s also unclear whether the new legislation would have prevented any of the gifts received by McDonnell, since Jonnie R. Williams Sr., the executive who gave them, was not registered as a lobbyist. The scandal erupted when the Post reported that Williams had paid for the $15,000 catering bill at McDonnell’s daughter’s wedding. McDonnell did not disclose the gift, arguing later that it was for his daughter. Subsequent reports revealed many other undisclosed gifts that Williams gave to McDonnell and his wife. The new law will require public officials to disclose gifts to their immediate family, but that will not include grown children who do not live at home.

In February, federal authorities charged McDonnell and his wife with illegally accepting gifts. The pair has pleaded not guilty and the trial is set to begin in July. It remains unclear whether the couple violated any state ethics laws.

The legislation also creates an ethics advisory council, made up of appointees of the governor and the legislature, which will review — and, for the first time, post online — public officials’ financial disclosure forms. The council will be able to issue opinions but will not have any enforcement powers. The bill creates several new requirements for those disclosure forms.

“The most important thing is reporting,” Edwards said. “If people know who’s giving you money and it’s reported, then the public is entitled to elect who they want to elect.”

The bill now awaits action by McAuliffe, who has not said what he plans to do. In addition to signing or vetoing the legislation, McAuliffe could choose to amend the measure, which would require another vote from the legislature.

A spokesman for the governor did not immediately return a call requesting a comment.

On his first day in office, in January, McAuliffe issued an executive order that put a $100 limit on gifts to most executive branch employees. At the time, he called on lawmakers to pass “the strongest possible new ethics rules to hold all Virginia elected officials to the highest of standards.”