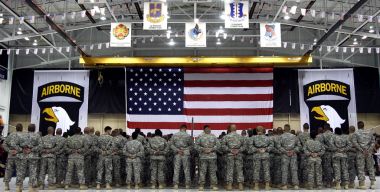 The sequestration project is by James Politi of the Financial Times and includes data analysis by the Center for Public Integrity.

Fort Campbell has an exceptional place in the history of U.S. warfare. The sprawling military base, which straddles the Kentucky-Tennessee border, was home to the special forces unit that helped raid Osama bin Laden’s compound and to the “Screaming Eagles” of the U.S. Army’s 101st airborne division, who stormed Normandy on D-day.

Its troops helped lead the 2003 invasion of Iraq; men and women from the 4th brigade are still toiling in Afghanistan. At least 370 troops from Fort Campbell have died in the wars that followed the September 11, 2001 terrorist attacks. A main boulevard running along the base is part of the “Purple Heart trail,” named for the honor awarded to soldiers wounded in combat as well as the fallen.

Now Fort Campbell is fighting a battle on the home front: automatic federal budget cuts — known as sequestration — set in motion after Congress and the White House failed to agree on other ways to shrink U.S. deficits.

This summer the vast network of services that supports Fort Campbell’s soldiers, their families and veterans began to feel the strain from those cuts. More than 3,000 employees have been forced to take furloughs, or unpaid leave, for six days, creating a ripple of shutdowns across the base. The local army hospital limited non-emergency surgery and shut its pharmacy on some days. The civilian-staffed commissary where soldiers and their families buy discounted groceries was closed on Mondays. Simple tasks such as renewing an identification card became difficult. Even the job of training soldiers was restricted to personnel who were about to be deployed. And while the traditional Independence Day fireworks still lit the night sky, a concert was cancelled and celebrations were muted.

As debate swirled last month over whether there would be new demands on the military — this time in Syria — furloughed workers, spouses of soldiers among them, were scrambling for cash. Active personnel still received their full wages, but the civilian workforce lost hundreds of dollars in take-home pay each month.

“Employees have had difficulty meeting their basic living expenses: their mortgage, their car payment, their car insurance. It’s ‘who do I pay now? Who do I pay first?’” says Judy Hansford, a union leader at the base, whose office has handled dozens of inquiries from distraught workers.

Missing a bill payment, even temporarily, is not an option for many civilian Pentagon workers. A late utility bill payment could hurt their credit score, which is often a condition of employment. “They borrowed from friends, they borrowed from family, they backended loans, they took money out of their savings account, they took money out of their retirement account,” says Hansford.

A Financial Times analysis of data culled from a 2010 U.S. Census report found that the automatic cuts are being felt most in counties with military communities. Across the 388 counties in the United States that have one or more military installation, the sequestration impact per capita is $312.40. This is a one-year estimate. That is nearly twice as high as in the 2,727 counties without a military installation where the sequestration impact per capita is $171.27.

Of the $1.2 trillion in automatic cuts over a decade, the Pentagon is slated to shoulder half the burden, or about $600 billion, under the Budget Control Act of 2011 that established the cuts.

In the borderland of western Kentucky and central Tennessee, those federal dollars flow into local businesses and provide jobs: Fort Campbell accounts for $4.7 billion in annual economic activity in the region and is one of its biggest employers. 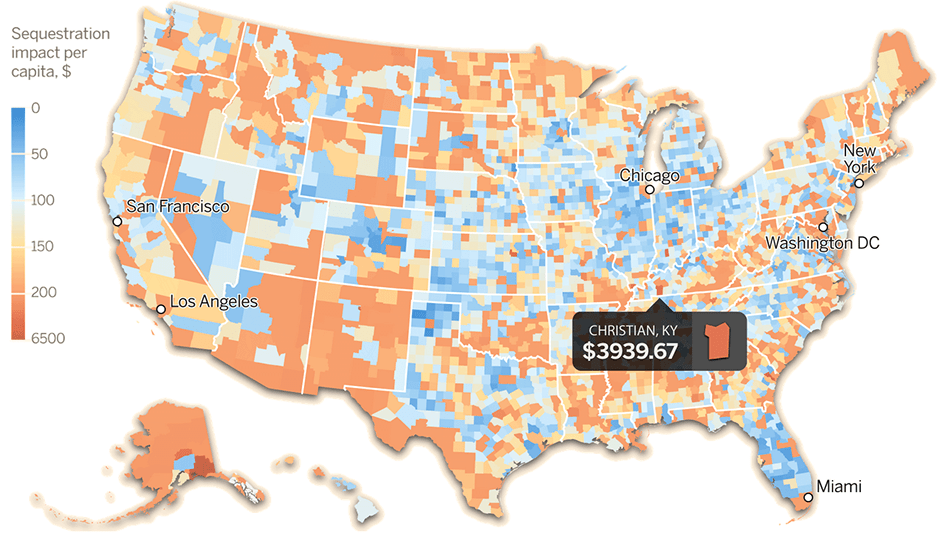 Unemployment in the area has surged in the past year even as national jobless figures have improved steadily. In the Clarksville, Tennessee, metropolitan area the jobless rate has risen to 9.4 percent from 9.1 percent as sequestration took hold. In Christian county, Kentucky, the jobless rate rose 2.4 percentage points to 13.2 percent over the 12 months to July, close to its peak after the financial crash. The national rate in August was 7.3 percent.

The Pentagon scrambled to limit planned furloughs to six days rather than 22, the number announced when the cuts began in March. There is concern, reflected in daily conversations in this military town, that the cuts will become permanent as Congress and the White House prepare for another budget battle this fall. A possible government shutdown this week could result in more furloughs of government workers across the U.S.

“For a short period of time, you can stand on your head and swallow peanut butter,” says Wayne Saint Louis, a retired command sergeant major from the 101st airborne division, and vice-chair of the military affairs committee in adjacent Clarksville. “But I am concerned that it will become the standard.”

Hansford, who has worked at Fort Campbell for 30 years as part of the army logistical unit, says the cuts from Washington have damped morale in the town and disrupted normal life. She did not take a holiday this summer, could not buy as many back-to-school supplies for her grandchildren as she would have liked, limited her purchases of fruit and vegetables at the local farmers’ market and delayed a dental appointment — all because of sequestration.

“You have to figure out, OK, what am I going to do now? Do I need the medication or do I need groceries? It’s difficult to even talk about because the future is uncertain,” says La­Wanda Morgan, who works at the commissary and was furloughed. The divorced 53-year-old says some of her colleagues who work part-time have suffered more. “It’s very difficult to make ends meet when you’re already working on a 24-hour-a-week salary, and to cut that down to 20 hours or 16 hours, it’s hard,” Morgan says.

Many Democrats, and some Republicans, have made the case that the Pentagon budget is bloated and needs to be slashed. Even Robert Gates, the former defense secretary, warned that defense spending was “divorced from the real threats of today, the growing perils of tomorrow and the nation’s grim financial outlook.”

Some cuts occurred naturally as troops withdrew from Iraq and Afghanistan, meaning communities such as Fort Campbell had been grappling with austerity even before sequestration. But the indiscriminate nature of the latest cuts — Pentagon officials had little choice in selecting where and how to economize — is viewed as unnerving and even offensive to those coping with deployments and war-related anxiety. “We needed to make some changes but furloughs are not the answer,” says Saint Louis. “When the [soldiers] volunteer to serve they expect to get some of the benefits that come with it.”

Officials at Fort Campbell have been putting a brave face on the cuts. “It’s been hard. We all understand that we are in a new fiscal landscape and there will continue to be challenges,” says Colonel George “Ned” Appenzeller, an emergency physician who recently became commander of the army hospital.

The base organized town hall meetings for affected workers and tapped charities to help keep some services alive. “We had to maneuver left and right to try and meet the needs of the community,” says Robert Jenkins, a Fort Campbell spokesman. But Jenkins, a navy veteran who is a civilian employee, says the furloughs have affected his life, too, from “what food I put on the table” to what he could save for his daughter’s education.

At the Snapshotz portrait studio inside the main shopping mall on Bastogne Avenue, within the boundaries of Fort Campbell, photographer Curtis Scott says he has felt the effects of sequestration. This summer there were “definitely less portraits” ordered. “They didn’t know when it was going to end. They were telling us ‘Hey, I’ve been cut back, losing $700 every two weeks.’ That’s a significant amount of money,” Scott says.

Kensley McLellan, the director of military affairs at the Christian County Chamber of Commerce, whose husband is serving in Afghanistan, says the region has become accustomed to big economic fluctuations coinciding with troop deployments and homecomings, so it can be difficult to quantify the precise impact of sequestration.

The area around Fort Campbell took on the appearance of a ghost town a decade ago when the entire 101st airborne division deployed to the Middle East, Jenkins says. Family members moved back to their hometowns. Still, the region’s unemployment rate in September 2001 was about 5 percent before rising in the recession.

Politicians have been streaming through Fort Campbell during the course of the summer to express their sympathy for the plight of the furloughed workers, but they have not made big promises. For months Republicans and Democrats have been at odds about how to replace the cuts with the left pushing for higher taxes on the rich plus new modest spending reductions, while the right wants spending cuts only, including to sensitive senior health and pension programs.

In conversation, soldiers, family members and civilian workers are reluctant to apportion blame for the damage done by the fiscal impasse, whether President Barack Obama or the four Republican senators who serve the base’s home states, including Mitch McConnell, the Senate minority leader from Kentucky.

President Obama signed the bill that set sequestration in motion in August 2011 just before the United States risked defaulting on its debt. McConnell voted for it, as did Lamar Alexander and Bob Corker, the two Republican senators from Tennessee. Marsha Blackburn and Ed Whitfield, Fort Campbell’s two members of Congress, also approved the legislation. Only Rand Paul, the Tea Party-backed Republican senator from Kentucky, was opposed — and that was because he deemed the cuts too soft.

One test for the political leaders will come in the 2014 midterm congressional elections. Fort Campbell’s two veteran senators, McConnell and Alexander, are expected to face tough races, so the toll of sequestration could come back to haunt them.

McLellan says sequestration has yet to trigger outbursts from a community known for stoicism and resilience. “No one’s tried to picket the garrison command, no one’s thrown eggs at anybody,” she says.

Yet inside Fort Campbell, people are incredulous that a decade of sacrifice from its soldiers, their families and the staff who supported them has been rewarded with a wound from Washington. “Sequestration is a bad deal. I don’t know why it hasn’t been repealed,” says Hansford. “It’s one thing to prepare for an emergency. It’s another to prepare for your employer axing your paycheck, your standard of living.”