Defense Secretary Leon Panetta outlines a plan to keep defense spending mostly level during a news conference in January at the Pentagon. A nationwide survey conducted in part by the Center for Public Integrity found strong popular support for deep cuts to the defense budget. Pablo Martinez Monsivais/AP file

To trim the deficit, Americans favor much deeper reductions at the Pentagon than their leaders do

While politicians, insiders and experts may be divided over how much the government should spend on the nation’s defense, there’s a surprising consensus among the public about what should be done: They want to cut spending far more deeply than either the Obama administration or the Republicans.

That’s according to the results of an innovative, new, nationwide survey by three nonprofit groups, the Center for Public integrity, the Program for Public Consultation and the Stimson Center. Not only does the public want deep cuts, it wants those cuts to encompass spending in virtually every military domain — air power, sea power, ground forces, nuclear weapons, and missile defenses.

According to the survey, in which respondents were told about the size of the budget as well as shown expert arguments for and against spending cuts, two-thirds of Republicans and nine in 10 Democrats supported making immediate cuts — a position at odds with the leaderships of both political parties. 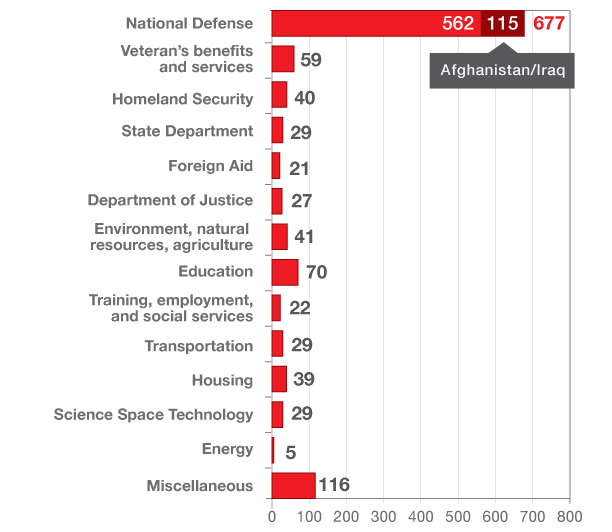 The discretionary budget is what Congress has the chance to decide every year. This graphic shows the relative level of expenditures on different programs. The disparities provoked broad surprise in the survey, although other ways of comparing defense and non-defense spending prompted less surprise.

The average total cut was around $103 billion, a substantial portion of the current $562 billion base defense budget, while the majority supported cutting it at least $83 billion. These amounts both exceed a threatened cut of $55 billion at the end of this year under so-called “sequestration” legislation passed in 2011, which Pentagon officials and lawmakers alike have claimed would be devastating.

“When Americans look at the amount of defense spending compared to spending on other programs, they see defense as the one that should take a substantial hit to reduce the deficit,” said Steven Kull, director of the Program for Public Consultation (PPC), and the lead developer of the survey. “Clearly the polarization that you are seeing on the floor of the Congress is not reflective of the American people.”

A broad disagreement with the Obama administration’s current spending approach — keeping the defense budget mostly level — was shared by 75 percent of men and 78 percent of women, all of whom instead backed immediate cuts. That view was also shared by at least 69 percent of every one of four age groups from 18 to 60 and older, although those aged 29 and below expressed much higher support, at 92 percent.

Disagreement with the Obama administration’s continued spending on the war in Afghanistan was particularly intense, with 85 percent of respondents expressing support for a statement that said in part, “it is time for the Afghan people to manage their own country and for us to bring our troops home.” A majority of respondents backed an immediate cut, on average, of $38 billion in the war’s existing $88 billion budget, or around 43 percent.

Despite the public’s distance from Obama’s defense budget, the survey disclosed an even larger gap between majority views and proposals by House Republicans this week to add $3 billion for an extra naval destroyer, a new submarine, more missile defenses, and some weapons systems the Pentagon has proposed to cancel. Republican presidential candidate Mitt Romney has similarly endorsed a significant rise in defense spending.

When it comes to military forces, respondents on average favored at least a 27 percent cut in spending on nuclear arms — the largest proportional cut of any in the survey. They also supported, on average, a 23 percent cut for ground forces, a 17 percent cut for air power and a 14 percent cut for missile defenses. Modest majorities also said they favored dumping some major individual weapons programs, including the costly F-35 jet fighter, a new long-range strategic bomber, and construction of a new aircraft carrier.

“Surveyed Americans cut to considerably deeper levels than policymakers are willing to support in an election season,” said Matthew Leatherman, an analyst with the Budgeting for Foreign Affairs and Defense Project at the Stimson Center, a nonprofit research and policy analysis organization that helped develop the survey.

While Republicans generally favored smaller cuts, they overwhelmingly agreed with both independents and Democrats that current military budgets are too large. A majority of Republicans diverged only on cutting spending for special forces, missile defenses, and new ground force capabilities.

The survey, which was conducted in April, was designed differently than many polls on defense spending, which have asked respondents only if they support a cut. Its aim was instead to probe public attitudes more comprehensively, and so it supplied respondents with neutral information about how funds are currently being spent while exposing them to carefully-drafted, representative arguments made by advocates in the contemporary debate. The respondents then said what they wished to spend in key areas.

The survey’s methodology and the number of respondents — 665 people randomly selected to represent the national population — render its conclusions statistically reliable to within 5 percent, according to the Program on Public Consultation, which conducted it.

Somewhat surprisingly, all of the pro and con arguments about cutting defense spending attracted majority support, suggesting that respondents found many elements in the positions of each side that they considered reasonable. It also suggests that the survey fairly summarized contrasting viewpoints.

Sixty-one percent agreed, for example, with a statement that the U.S. has special defense responsibilities because it is an exceptional nation, while 72 percent said the country is “playing the role of military policeman too much.” Fifty-four percent agreed that cutting defense spending is problematic because it will cause job losses, while 81 percent — in one of the largest points of consensus — agreed with a statement that the budget had “a lot of waste” and that members of Congress regularly approve unneeded spending just to benefit their own supporters.

The survey suggested, in short, that most people do not see the issue in starkly black or white terms, but instead hold complex views about the appropriate relationship between defense spending and America’s role in the world. “Most Americans are able to hold two competing ideas in their mind and, unlike Congress, thoughtfully recognize the merits of both,” Kull explained. “And then [they] still come to hard and even bold decisions.”

The survey also showed that Americans react differently when given data on the current defense budget in different contexts — providing some insight into how partisans on each side of the debate might tailor their arguments to attract support.

When framed, for example, in the context of military spending by other countries, or the portion of the so-called annual discretionary budget devoted to defense, or the amount of money spent for defense during the Cold War, most respondents said they were surprised by how large the U.S. budget is now. But when compared to the overall size of the U.S. economy, or the size of the other two leviathans in the federal budget — U.S. spending on Medicare or Social Security — most respondents said they were not surprised.

By far the most durable finding — even after hearing strong arguments to the contrary — was that existing spending levels are simply too high. Respondents were asked twice, in highly different ways, to say what they thought the budget should be, and a majority supported roughly the same answer each time: a cut of at least 11 to 13 percent (they cut on average 18 to 22 percent).

In one exercise, a larger group chose to cut the defense budget (62 percent supported this) than to cut non-defense spending (50 percent) or to raise taxes (27 percent). They then chose to cut deeply as a means to address the deficit. In yet another exercise, respondents first read pro and con arguments for the nine major mission areas that now compose almost 90 percent of the budget; then a majority of Republicans and Democrats selected lower levels in eight of the nine areas.

For example, two-thirds of the respondents, including 78 percent of Democrats, 64 percent of Republicans, and 57 percent of independents, cut spending on nuclear arms. Respondents on average also sought to cut ground forces the largest dollar amount. The sole program that attracted average support for more spending was the Pentagon’s effort to develop new capabilities for ground forces, but the suggested increase was slight and mostly embraced by Republicans and independents.

Majorities took these steps even though they expressed slightly higher support, on average, for statements in favor of these programs than critical of them. Most notably, they said they were convinced that air power is important (77 percent), special forces are valuable (79 percent), and missile defense efforts are worth pursuing (74 percent), while giving arguments for the Navy and ground forces less backing (69 percent and 57 percent, respectively).

While most programs got either a trim or a buzz cut in the public salon, several won outright support. A majority opposed cutting the controversial V-22 Osprey, an aircraft that takes off like a helicopter and flies like a plane. Even after being told its cancellation would save $1 billion, a clear majority backed its continued production. And even while most respondents favored killing the new strategic bomber, they solidly backed continuing to use bombers to carry nuclear arms as part of a “triad” of forces, alongside land and sea based missiles.

Whether the weight of public attitudes will be felt in Congress and the White House is unclear. As close students of Washington know, legislative outcomes here are often determined not by average views, but by the passionate convictions of noisy minorities. As a result, it’s worth noting which arguments attracted not just support from solid majorities but high rankings as “very convincing.”

“Americans’ views as expressed in this survey are a big reason why policymakers — after the election — are likely to tighten the Pentagon’s strategy and cut national defense spending more deeply,” said Leatherman, the Stimson Center analyst.

VIDEO: What kind of defense budget would the American public make?