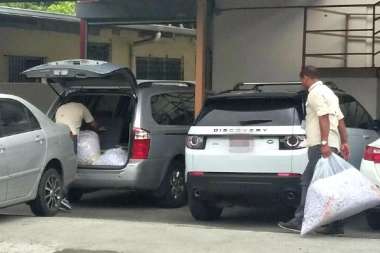 Investigators removed bags of shredded paper after a raid on a Mossack Fonseca facility in Panama.

Uruguayan prosecutors are seeking to bring to trial at least five individuals detained on suspicion of laundering money for a powerful Mexican drug cartel, including at least one suspect allegedly linked to a company named in the Panama Papers.

The five were among 11 initially detained in Montevideo on Friday by more than 30 law enforcement officials. The officials were already investigating, but decided to move quickly to preempt any attempt at flight after the weekly online magazine Busqueda reported that Gerardo González Valencia had used shell companies incorporated in Panama to buy real estate in Uruguay, including a chalet in Punta del Este.

The story was part of the Panama Papers investigation by the International Consortium of Investigative Journalists, German newspaper Süddeutsche Zeitung and more than 100 other news organizations that dug through 11.5 million files containing information on decades of operations by Panama law firm and offshore company incorporator Mossack Fonseca and Co.

The U.S. Treasury Department’s Office of Foreign Asset Control said when it named the two kingpins that the two organization “have rapidly expanded their criminal empire in recent years through the use of violence and corruption.” Acting director of OFAC John E. Smith said then that they “now rank among the most powerful drug trafficking organizations in Mexico.”

Meanwhile, a story by ICIJ partner the McClatchy Company news chain reported that Ecuador’s president Rafael Correa and his brother had been mentioned in a Mossack Fonseca email to a law firm for which it provided shell corporations for its customers.

Sara Montenegro, a lawyer for Mossack Fonseca, sent an email in May 2012 to a Guayaquil firm “to notify you of an investigation being undertaken by the office of the Anti-Corruption Prosecutor of Panama, in reference to Misters FABRICIO CORREA and RAFAEL CORREA DELGADO for the crime of embezzlement against the Ecuadoran state, an investigation which involves a Panamanian corporation that was sold to you in 2006 called ORLION GROUP S.A.” The email was sent to a lawyer working for the Legalsa & Asociados firm, which had opened the offshore on behalf of an unidentified customer.

The prosecutor wanted shareholder information “which we did not give since we don’t have it,” Montenegro added. She asked Legalsa & Asociados for information on the true owners of the Orlion Group S.A. because an official demand was likely.

A few days later Mossack Fonseca’s head of compliance, Sandra de Cornejo, had recommended that her firm drop services to the Orlion Group S.A. “Although we have not found anything that ties the Correas and the entity,” she said, “I suggest resigning … because of the scant cooperation received from the client,” which Mossack Fonseca had asked for “know your customer” information two years before. Mossack Fonseca resigned as Orlion Group’s agent in July 2012.

In an unrelated incident, Panamanian officials seized bags of shredded paperwork during a search of another of the law firm’s premises late last week.

The search was conducted as part of an ongoing investigation into the law firm’s activities. Mossack Fonseca’s Panama City headquarters was raided by police earlier in April.

Mossack Fonseca said the shredded paperwork seized in the latest search were documents that had been digitized and were to be recycled. The firm said authorities had already obtained copies of these files during their initial search of the firm’s headquarters.

The searchable database will include more than 200,000 offshore entities